Together We Can Build a Better Future

On May 16 we announced additional funding in our campaign for a new downtown YMCA. 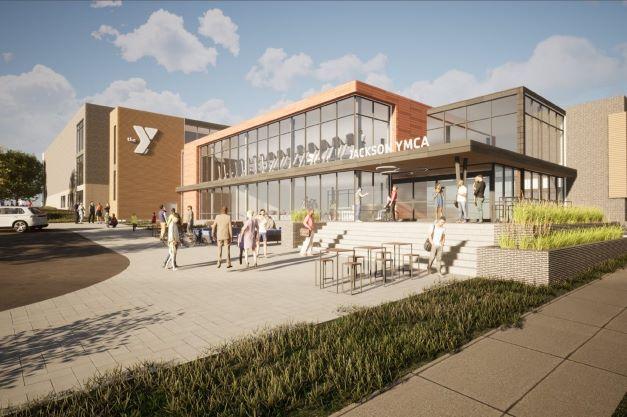 When President Joe Biden signed the omnibus bill into law earlier this year, we learned we would receive $3 million for the new Y. For the past year, YMCA leaders have worked with a number of local and national leaders, including Sen. Debbie Stabenow’s office, to secure federal funding for the project. The unprecedented award further closes our funding gap, sending the campaign over its original $25 million goal. Funding for the Jackson YMCA and other Ys across the country was included in the Consolidated Appropriations Act. Federal funding for the Jackson Y was among the largest awarded to a YMCA.

“We are thankful for the advocacy and effort provided by an inspiring cross-section of local, state and national officials to help the Y secure this funding,” said Jackson YMCA CEO Shawna Tello. “The fact that the dollar amount raised in our campaign is the largest-ever for a YMCA in Michigan stands as a testament to the people and potential of Jackson.” She added that while conversations continue with private donors, Y leaders and volunteers are celebrating the conclusion of the successful campaign.

In late 2021, Y volunteer and staff leadership announced their decision to address emerging community needs, rising member expectations and collaborative opportunities by combining the benefits of new construction with adaptive reuse of portions of the existing facility. Over the last five-plus months, our campaign leaders and volunteers have worked closely with construction manager Granger Construction Co., architect/engineer Bergmann and Gro Development, a national leader in the development, design, and management of YMCAs.

To determine the viability of the existing facility, a Physical Condition Assessment (PCA) was completed in early 2022. The PCA has informed the budget development efforts of Granger as well as the design and adaptive reuse work of Bergmann. With budget and design work nearly finalized, Bergmann has completed a rendering of the exterior of the new and renovated YMCA. The image shows the new Y entrance directly east of the existing south-facing entrance on W. Wesley Street.

“We’ve retained some of the most capable companies in the country who specialize in this work,” said Jason Vasaris, a Y board member and chair of the Building & Design Committee. Vasaris is a Project Manager – Real Estate Acquisition for Consumers Energy. “We are proud of their work and support the plan for executing this vision for the Jackson community.”

Additional updates will be released this summer upon completion of the budget and design work. The Y brings people together

Working with community partners, donors, staff and volunteers, the YMCA is able to:

And so much more!

As the nation’s leading nonprofit for Youth Development, Healthy Living, and Social Responsibility, we can make a positive, meaningful impact – right in YOUR Neighborhood.

Capital Campaign in the News